Finally, my jet lag is over.  It was much worse in Los Angeles and ended shortly before my return flight to Rome.  How wonderful!

The LCDQ Legends interior designer conference is one of the most popular events in the industry. I’ve heard designers call it the Coachaella or the Oscars of interior design.  There were more than ten thousand RSVPs for the three-day event, with designers from over twenty-four states, and one hundred and fifty designers traveling to Los Angeles from overseas.

This was my first year attending. It was fantastic. There were Interesting and informative panel discussions, fun parties, and over sixty-seven inspiring window displays.

Not only did I enjoy visiting some of my favorite (and new) showrooms, I appreciated the style of my fellow decorators. Folks were not playing. It does make sense that many interior designers/decorators have a great sense of style.  I forgot how super casual Los Angeles is until I saw someone walk into Urth Cafe in Beverly Hills wearing pajamas bottoms.  I’m talking about the sloppy, comfortable ones you sleep in, not the dressy ones you would wear to a party.

I also had Hollywood film/TV meetings but since this is not a screenwriting blog, all I will say is that everyone is talking about EMPIRE.  We’ll see how this hit show changes the landscape.

There were many highlights and I left feeling very energized (and determined to move to a new neighborhood).

Opening night gala.  My friend Corrina (an interior design junkie) came with me.  It was packed.  The food was delicious.  I felt drunk despite not drinking at all.  The jet lag struggle was real that night. 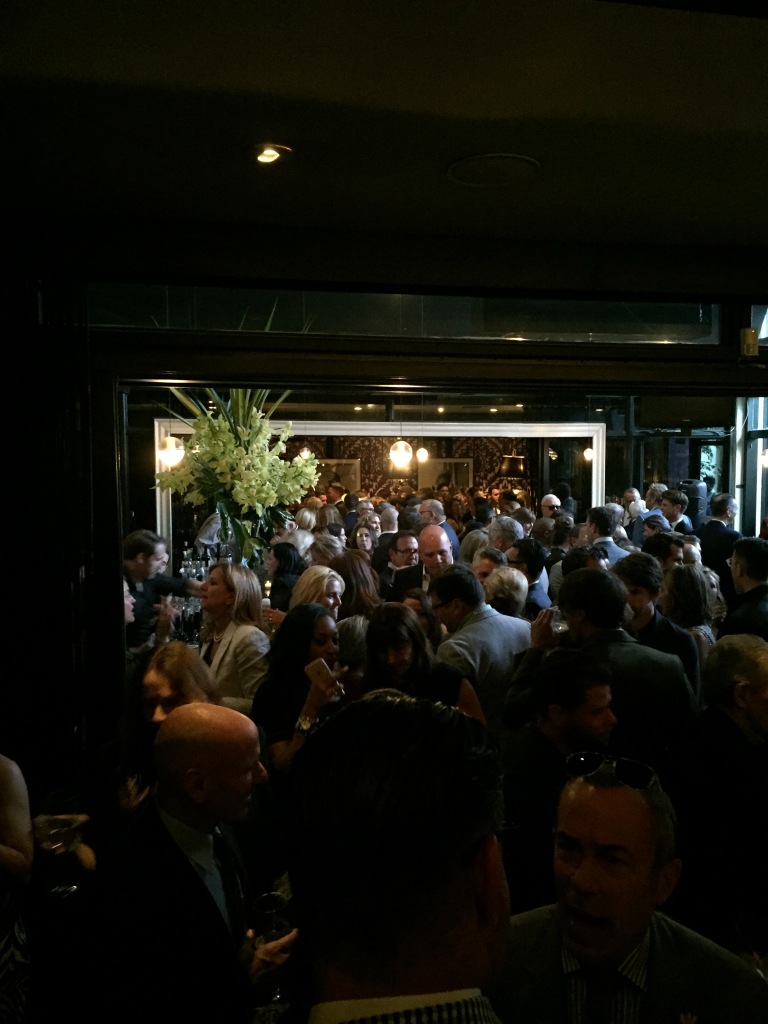 The official kick off.  The Bloggers Breakfast.  I met Erinn Valencich from American Dream Builders. So nice. Perhaps my experience is not the norm, but I’m constantly surprised by how friendly and helpful people are in this industry.  At the conference I met some serious A-listers and they couldn’t be more down to earth. It’s shocking!

There were many famous design bloggers attending the breakfast but the room was so crowed it was impossible to move around. I found out who was at the event after seeing their Instagram feeds.

Yes, I took a photo of this Italian shower head. I love that other people were also taking photos of faucets and shower heads. I could spend hours discussing such things. 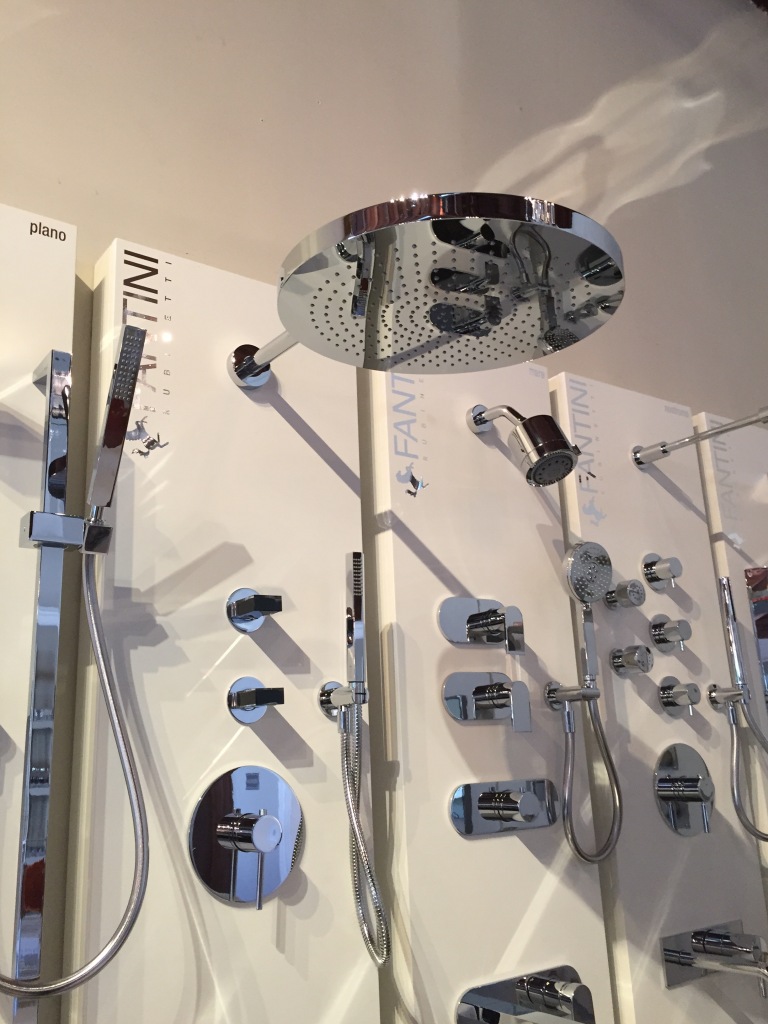 I’ve written about Peter Dunham before. His showroom, Hollywood at Home, has moved to a new location. Beautiful. I ordered some fabric samples for my Anguilla beach house project.

You know how I feel about Peonies.

How gorgeous is this dark blue club chair at Mecox?

This table? Perfect for a bedroom, entryway, or a small office. 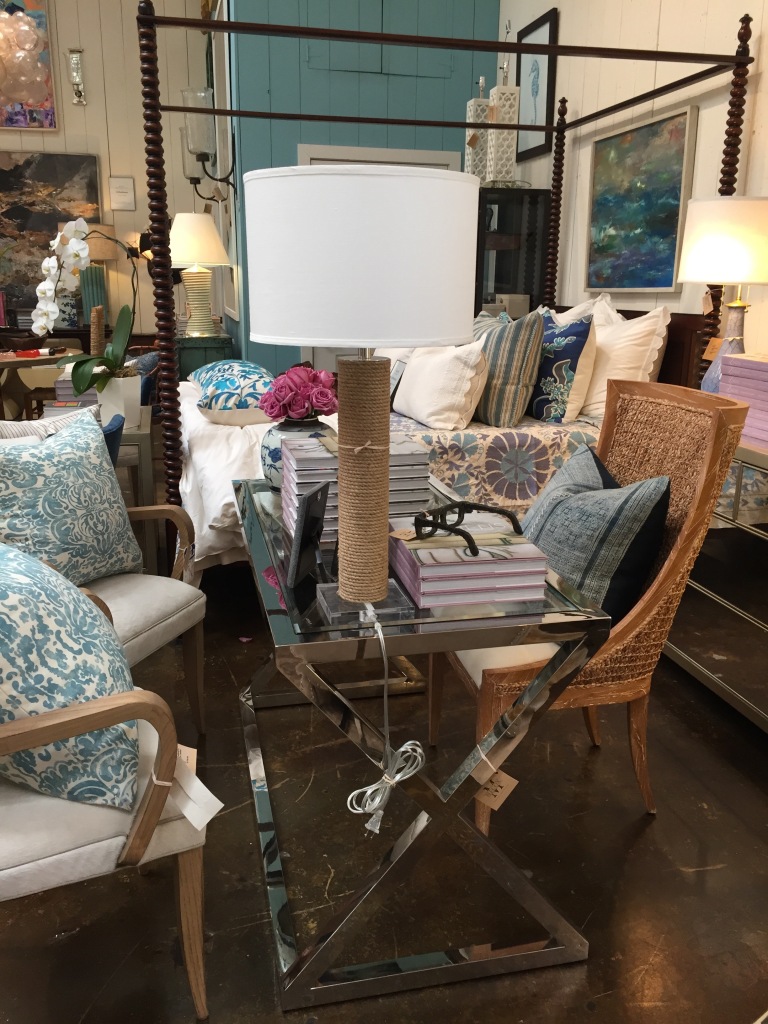 Everyone was so cheerful.  It really unnerved me. Ha!

This photo was taken at the ELLE DECOR Power Luncheon.  Very pretty and again, great food. 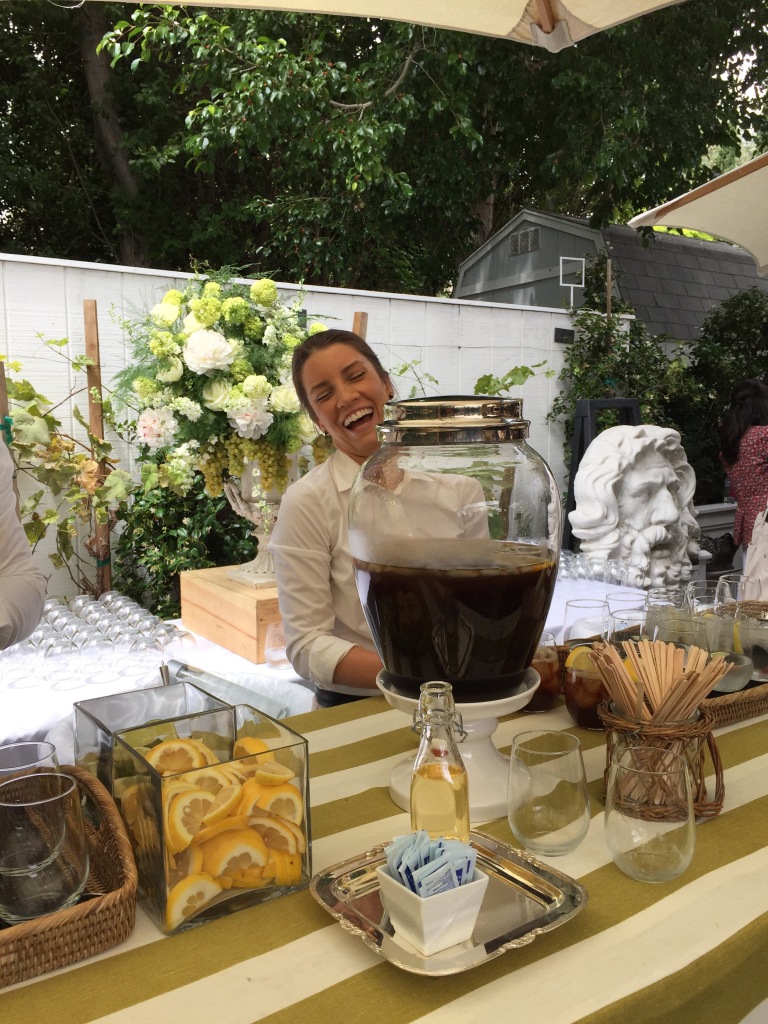 The take away?  Dining rooms are not obsolete, despite what developers of McMansions say. They’re being used differently, less formal.  I agree and wish I had one.

I read Windsor Smith’s new book once I returned to Rome.  I highly recommend adding it to your library.  It was great to meet Windsor and to spend time in the Arteriors‘ showroom. 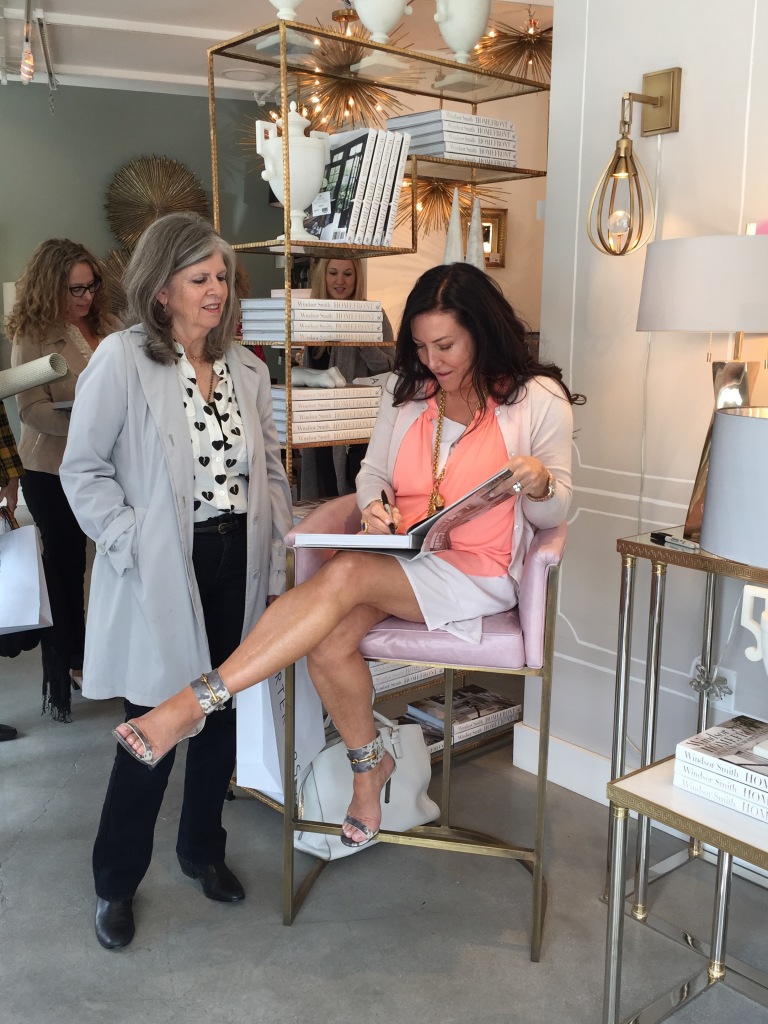 I love that Arteriors was serving cocktails at 2:30 p.m. on a Friday afternoon.  Unfortunately, I was driving non-stop in Los Angeles.  Still, I enjoyed the festive atmosphere. 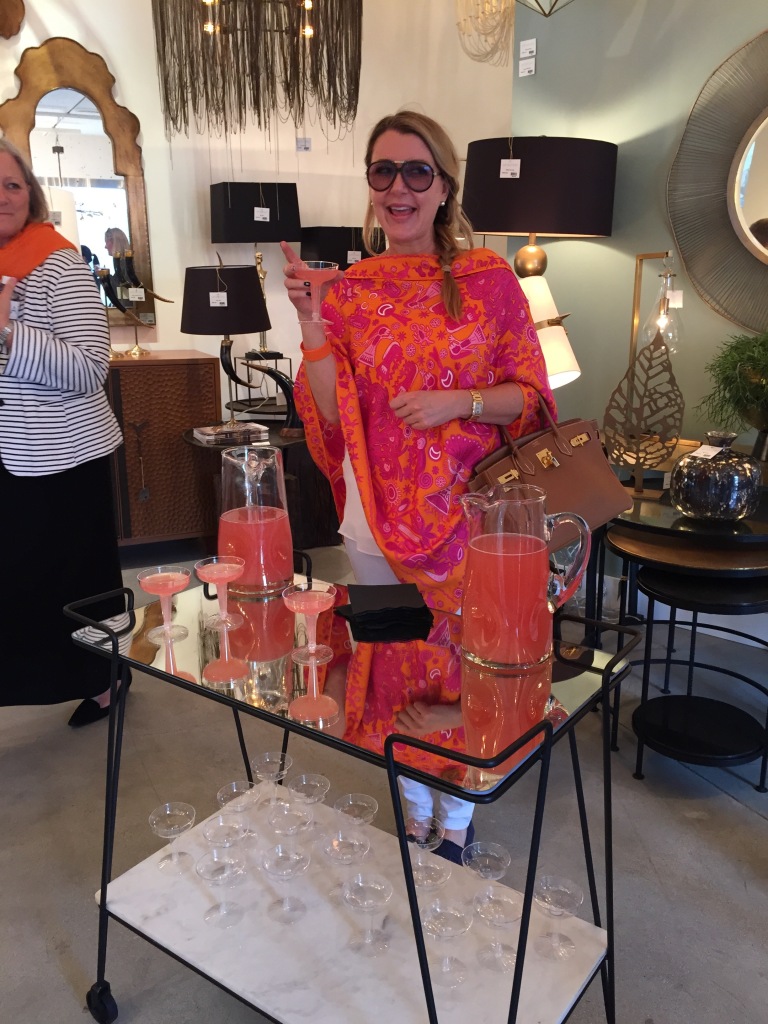 One of the most popular events is the Moore and Giles cocktail party, co-chaired by Harbinger LA and the Hearst shelter magazines (Veranda, Elle Decor, and House Beautiful) in the Harbinger backyard.

More Aperol Spritz.  The Italian inspired menu was catered by Lulu Powers and was delicious.

My incredible experience ended with an intimate party at Kathryn M. Ireland’s beautiful home.  I forgot my phone (the HORROR!).

Paloma Contreras of La Dolce Vita blog wrote a post about it.

Ireland has moved her West Hollywood showroom next door to her textile printing shop on Washington street. Outside, it looks like any other nondescript industrial space. Inside, is a completely different story.

I cannot believe it’s been almost three years since I attended her Interior Design Boot Camp.  It was one of the best investments I’ve made in my career.  It was also a lot of fun. 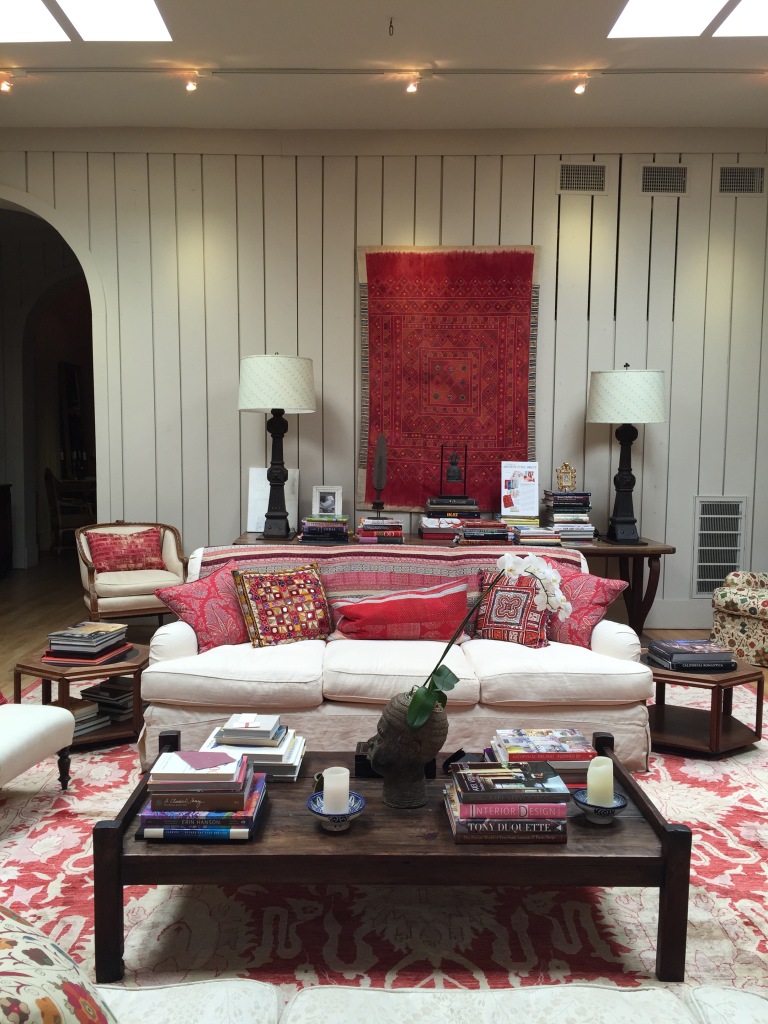 Photos: My and my iPhone.