Earlier I wrote about the Via Monserrato project.  One of the other apartments we worked on was located two blocks away on Via Banchi Vecchi.  It was a new apartment for our client.

The apartment was empty so we didn’t have the same logistical issues but two bathrooms, and the kitchen had to be renovated.   Any time you start opening walls you will have some surprises, especially in a building that’s over three hundred years old.

The brief from the client stated that the unique original flooring and the red tiles in the kitchen could not be replaced.  The floors weren’t in great shape but I like to think of them as adding character.  The client wanted to improve the layout, add a closet in the bedroom, lighten up the very dark kitchen, and make the second bathroom more functional.

The bulk of the budget went to the renovation.  Some of the furniture came from the other apartments.  We bought a mix of high-end hardware/fixtures along with budget friendly pieces.

The minute the client stated that they had to change the layout, we called an architect.  Fortunately, Domenico Minchilli and his studio took on the project. Square footage wise it was a lot smaller than their usual projects but it was complicated.  We had worked together before which made the renovation process, never easy, smoother.

True, this is not a primary residence but I don’t think any guest would want to spend a lot of time in here.  It was impossible to get a decent shot of this dark, cramped space.

The hallway before. The kitchen is behind the wall on the right.

There were structural issues that had to be addressed (electrical, ventilation) so a upgrade/renovation had to happen. 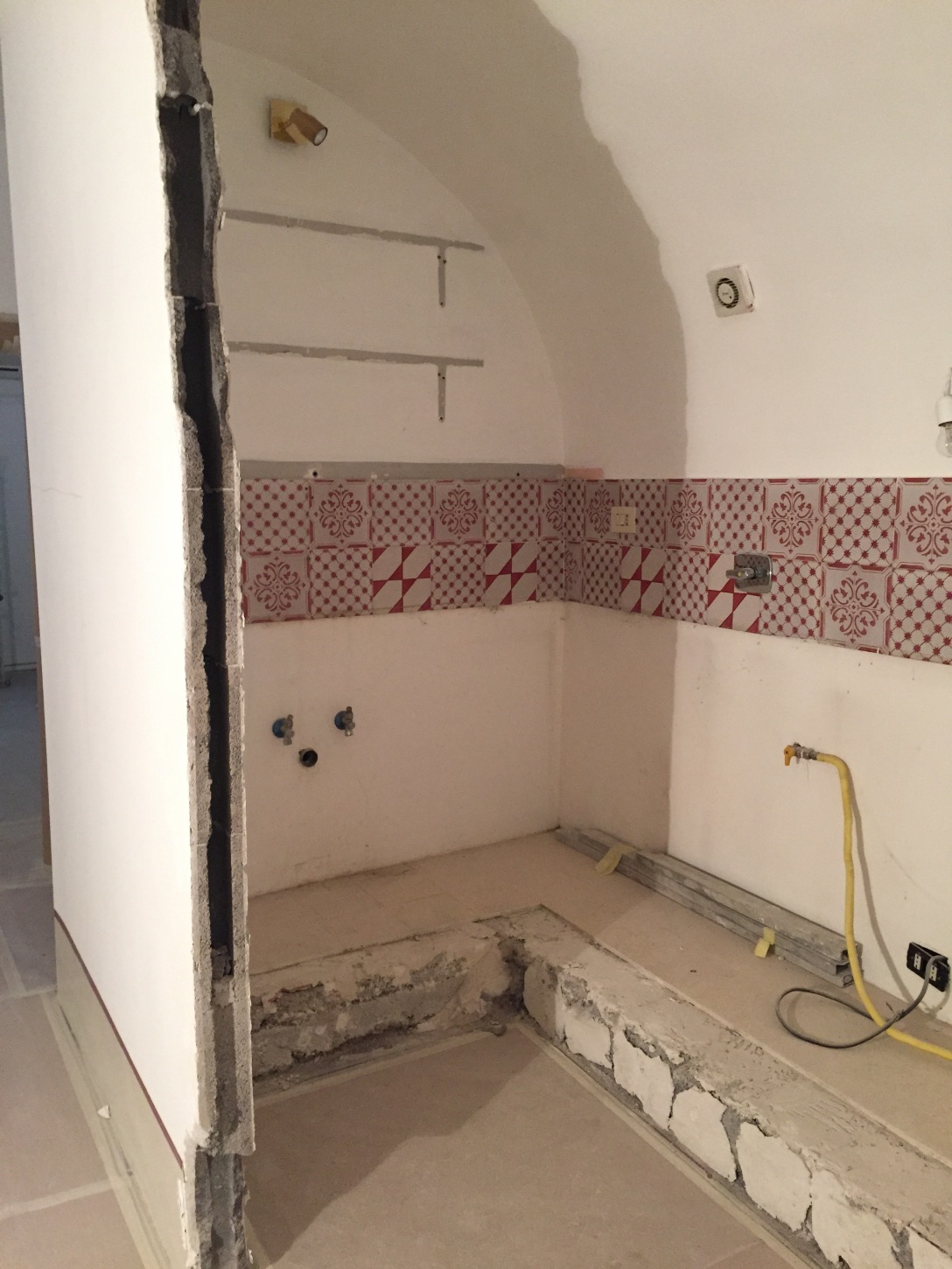 Originally, we discussed opening just one of the walls.  Studio Minchilli suggested removing all them so you could see the entire arch as you walked into the apartment.

What a difference.  It’s light and there’s plenty of space to move around. The cabinets are from IKEA but the counter top is quartz from Stone Italiana.   We decided to spend more for a higher quality counter top given the open plan design.  It elevates the entire space, making the IKEA cabinets look more expensive.

My anxiety level was not good the morning of this installation. A heavy slab, cut to order.  Three men had to carry it. 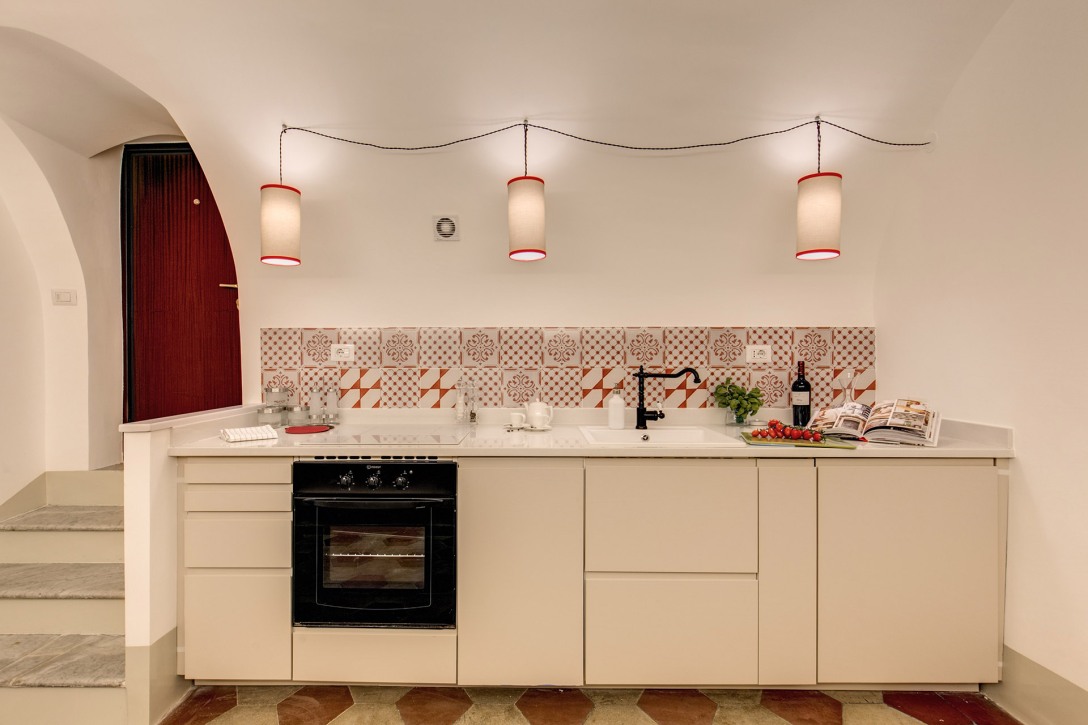 We also installed LED lights on the right.

There were dated, inexpensive white tiles on the floor. 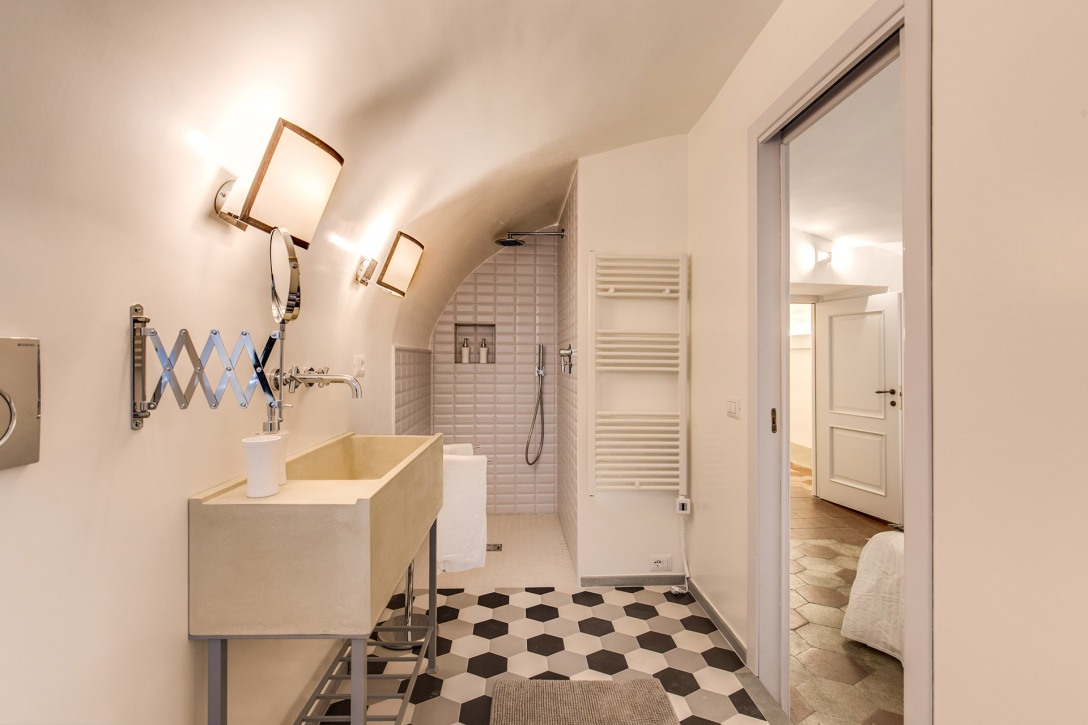 The tub was replaced with a shower.

We decided to go with a combination bidet and toilet, which is great for small spaces.  The client wanted a unique sink.  We ordered these (which were quite heavy, our poor contractor) and asked our blacksmith to build the bases.

Notice, we didn’t put tiles on the walls.  Similar to the Tuscany Project, we wanted the bathrooms to feel more like a room and less clinical.  For a busy family bathroom this option could be impractical but I really like how these rooms feel without tiled walls.

The design of the new tiles mimics the original tiled floors in the rest of the apartment.  While these colors look great together, installing three colors is a different story. Complicated.

The tiles, sink, and all hardware were purchased at LOZZI.

The sconces are custom. Il Paralume.

Paint is a custom color from Crown.

In the bedroom we added a pocket door, a built-in closet, and the lampshades are custom from Il Paralume.

Our carpenter also created a desk in the corner.

We completely changed the layout. We moved the entrance which enabled us to add space for a proper shower.

The door is custom made by our carpenter.  Door fixtures are from Handles. 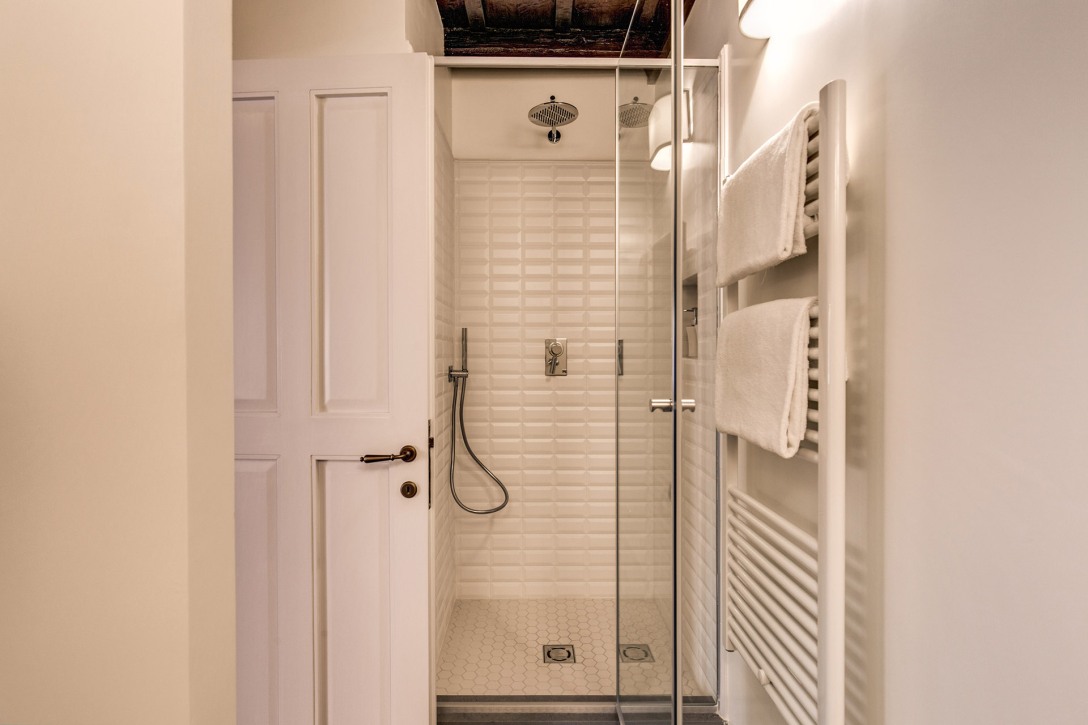 Here’s a better shot of the sink with the custom iron base.  As with the other bathroom, we bought a combination bidet and toilet.

The fantastic artwork is from Due Alberi.  They’re based in Rome but ship internationally.

The dining table is from MADE and the chairs belong to the client. 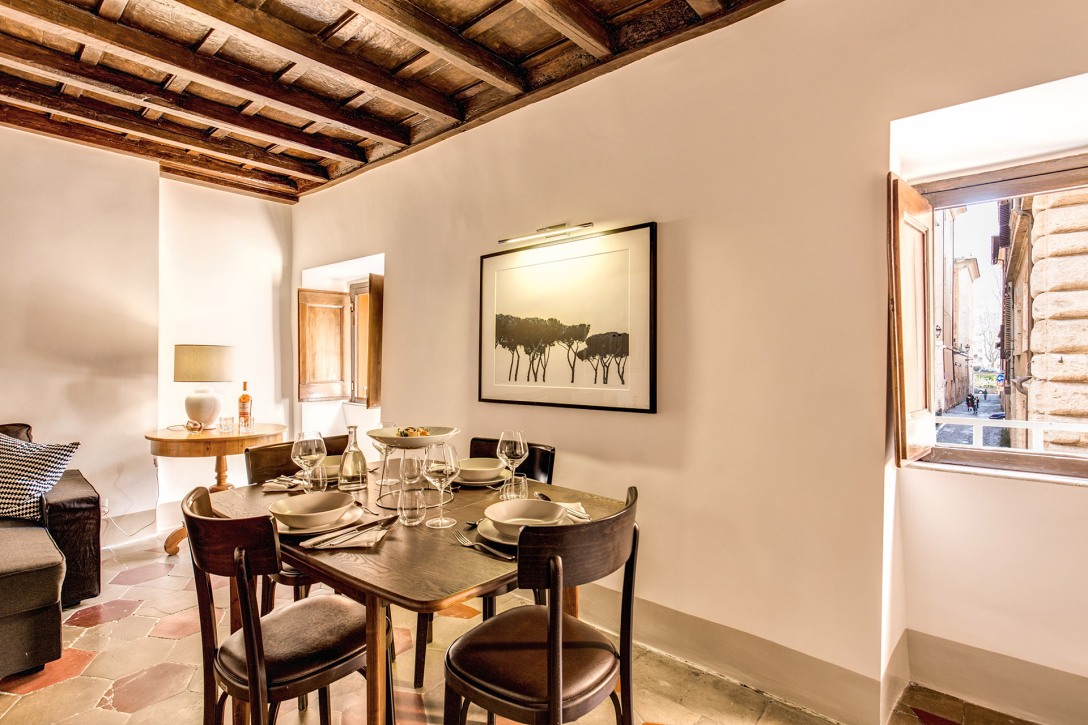 The side table came from the Via Monserrato apartment.  We found the lamp at Leroy Merlin (the French version of Home Depot).

The client found the credenza online.  The lamps were a great find at Leroy Merlin.  We were so tired and hungry. My client was worried about my mental health as we had just spent hours at the IKEA next door.  I perked up when I saw the lamps on a bottom shelf.  I was so excited.  It was like meeting Idris Elba.

Overall, the apartment feels lighter despite the lack of light (the windows are tiny).  The renovated kitchen and bathrooms compliment the style and architecture of the apartment.  We updated them but without losing the charm.

We kept the palette very simple, creamy whites, grey, black, with a touch of red.  The ceiling seems higher and apartment looks/feels bigger.

For more information about this vacation rental, please check out Your Suite Rome on Booking.com.

11 thoughts on “Before & After – Via Banchi Vecchi Project”