Happy New Year! I hope 2018 brings you much joy, peace, and happiness.

I have read about and seen photos of the infamous trulli. Alberobello, which we visited during our Eat, Pray, Move, retreat, was packed with many American tourists even though it was late September.  I can see why.  There’s nothing like it.  This region is the only area in Italy that has these unique buildings and there’s a concentration of them in Alberobello.

The white, cone-roofed houses in Alberobello are a UNESCO World Heritage site.  We had a great tour guide who explained the history of the trulli.  There are many theories but the most popular one (and likely) is that during the 1600’s the nobility imposed a high taxation on any permanent structure.  The poor farmers built their houses so the roofs could be dismantled easily, by bascially removing one stone.   Very clever.

We were able to tour a trullo.  It was incredible to learn some of them hosted whole families and their livestock.  Other homes were comprised of several trulli with each one being a separate room.

Our Masseria had several trulli on its property.  I love how the architects incorporated them into the modern structures.  Inspiring.

There are trulli with curious symbols on them.  Some are clearly religious, the others?  Another area for debate. 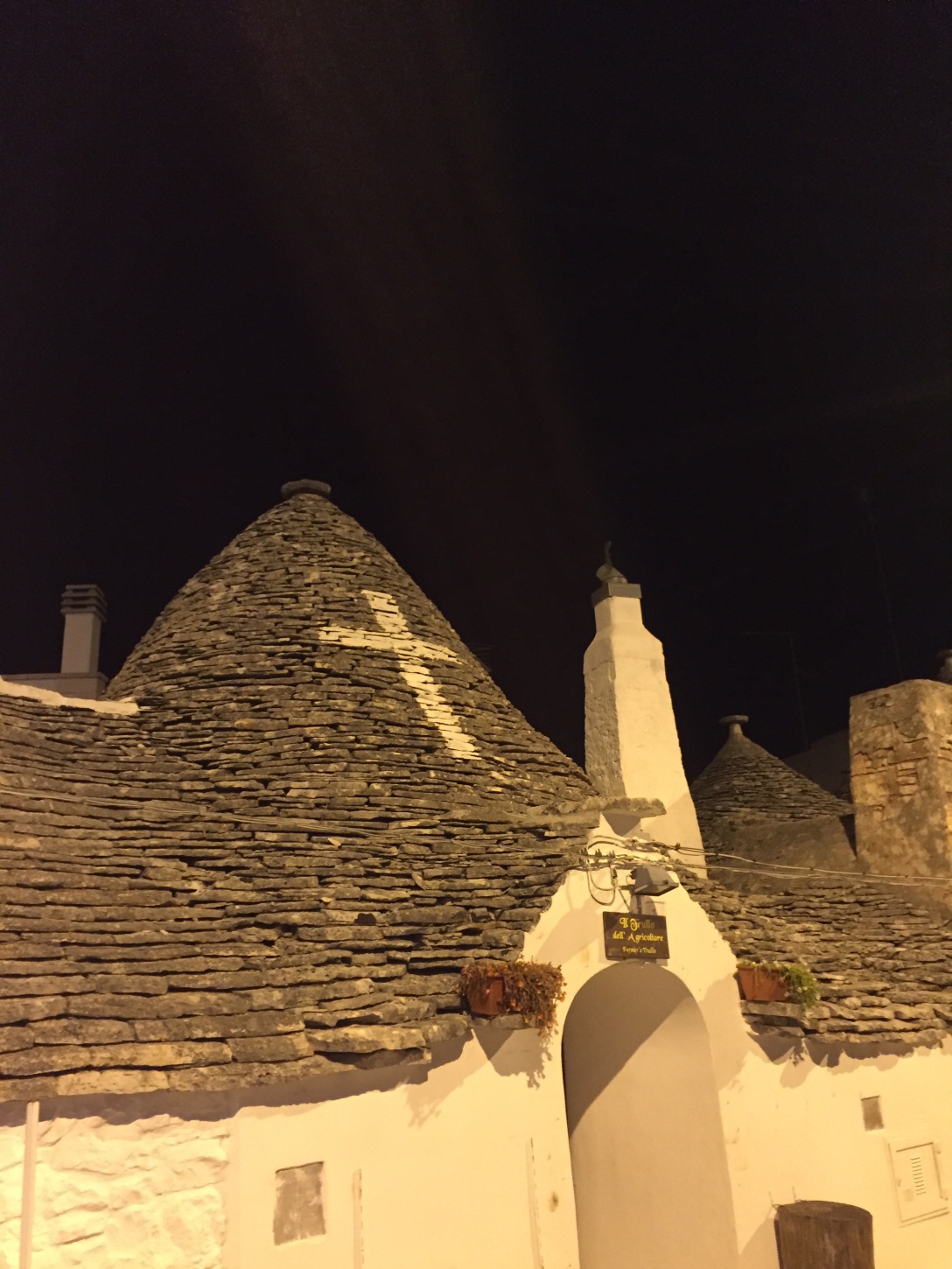 As you enter the main street of Alberobello, there are two hills.  The one on your left is the old town/Historic Center and the main tourist street.  It’s filled with gift shops and places to eat/drink.  There are a few shops selling items made locally. The other hill is more residential and the modern town.  There are several piazzas with caffes, and butchers, clothing stores, etc. etc.  The restaurant EVO, where I had one of the best meals ever, is located in a quiet corner near the Basilica.  I wrote more about it for the Casa Mia Blog. Grazie, Erin for arranging this unforgettable meal and wine pairing.

I suggest spending time on both hills. Alberobello is tiny.  The old town does have a bit of a Disneyland vibe but don’t let that stop you.  The view from the “new” town is spectacular.

Alberobello was celebrating its Saint’s Day.  On the new hill everything was lit.

We were there on a raining cloudy day so my photos of the old town are not great.  Here’s a better one from zee Internets.

I took this one in the backyard of a trullo in the old town that was under renovation.

These trulli were in the new town.

Photos: Me and my iPhone unless otherwise noted.